Yoga not an exercise. It is a way of life. 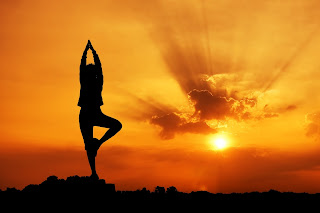 June 21 was declared as the International Day of Yoga by the United Nations General Assembly December 11, 2014. Celebrating 21st June as International Yoga Day has been supported by 177 countries which is a record for any of this kind of global events.

Yoga is considered to be a good exercise not only for body but also for soul. While the exact origins of Yoga in Ancient Indian history are unclear, it is speculated that Yoga as a form of exercise was adopted during Pre-vedic Indian times.

Here’s few good reason why you should adopt Yoga as a way of life.

Smart yogis know dumbbells aren't the only way to sculpt. "You're using your body weight to move from posture to posture, and in certain poses, you're lifting every pound of it." says Loren Bassett, an instructor at Pure Yoga in New York City. Yoga is one of the most comprehensive exercises since it works all the muscles of the body.

People having suffered from various problems of the joints (Arthritis), bones or muscles are recommended yoga. This is because yoga helps to strengthen our musculature and ligaments. Breathing and stretching techniques used in Yoga if followed can help to regulate the flow of various fluids in the body. Better circulation means that the body’s ability to self-heal gets a boost. With greater flexibility, we are able to move, grasp, push, pull and lift things with greater ease. This also ensures a better range of motion. According to researchers Yoga improves postures & strengthens back muscles better compared to physical therapy or even medicines.

Highly congested lifestyles combined with bad eating habits ensure that our heart is more prone to developing fatal conditions like a stroke. Cardiovascular problems have increasingly started affecting people who are barely in their mid-30s. Yoga by harmonizing the breathing pattern, helps to regulate the heart-rate and raise our overall physical endurance. The heart becomes less vulnerable when pushed into demanding, physical and mental situations. More oxygenated blood and a greater range of motion help to keep the body free from toxins.

According to a study conducted by The Journal of Sexual Medicine Yoga helps increasing your desire and ensures more exciting times in bed. Yoga helps reduce anxiety, increase body awareness and even leads to speed the release of hormones that rev arousal. All of this translates to a boost in libido, lubrication and ability to achieve orgasm.


One of the most common benefit of yoga is weight management. Since yoga works the entire body and makes the circulation of fluids more smoother, it leads to rise in the overall metabolic rate. Thus, more calories are burned. By working out the lean muscle mass, yoga makes it possible to burn fat, lose weight and look younger. The sense of calmness and stimulation of various bodily organs helps to fight-off the aging-causing free radicals that attack our skin on a daily basis.

Yoga helps to achieve a better physical and mental state of existence, everyday apprehensions are eradicated. Women who had followed yoga at least once a week for two years or more released 41 percent less of a tension-triggered cytokine (a type of protein) that can make you feel tired and moody compared with yoga newbies, a study in Psychosomatic Medicine notes.

Also people who are less worried and not bothered by frequent illnesses and naturally feel better. This helps to overcome issues like lack of self confidence or lack of compassion that are common, relationship hurdles. A more focused mind is undoubtedly able to address such problems in a more capable manner. People who regularly practice yoga have a better ability to comprehend situations.