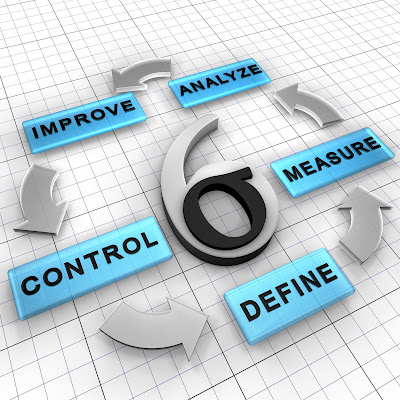 Mike was the best batsman in the Club Acme cricket team. The probability of Club Acme’s winning a match was higher when he batted well and scored more runs. His batting form had been declining the past few months, however,affecting the team’s win percentage and revenues. Improving Mike’s consistency with the bat would help the team win more matches. The team hired a Lean Six Sigma Black Belt to analyze the factors affecting Mike’s batting and develop an improvement plan. A project team was formed with the chief batting coach as the project leader.

The average number of runs scored by Mike per inning was 32.5 for the last 50 matches (January 2011 to December 2011) compared to his benchmarked 40 runs per inning. Team won only 36 percent of the matches they played in the same timeframe. (See Figure 1.)

Forty runs in a completed inning was the benchmark and set as the lower specification limit (LSL) for assessing process capability. Any complete innings in which Mike scored fewer than 40 runs was considered a defect. Mike played 50 matches in 2011 and as he usually batted at the top of the batting order, he was dismissed in all 50 matches. He scored more than 40 runs in only 14 out of 50 innings. 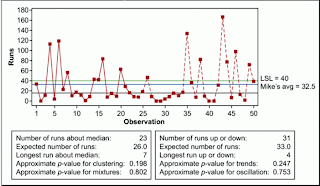 Batting Statistics for Mike in 2011 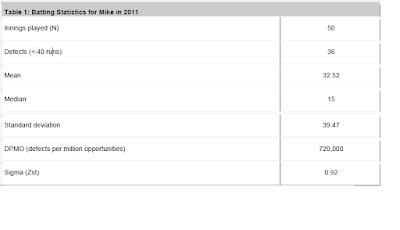 Root Cause Analysis of Batting Performance

The team analyzed data for all of the innings in which Mike scored fewer than 40 runs. In 30 out of 36 defective innings (83 percent), Mike was dismissed for fewer than 20 runs. Once Mike crossed 20 runs, the probability of playing a longer inning was high – he was dismissed only 6 times between 20 and 40 runs out of the overall 50 completed innings. Why was Mike dismissed so often before scoring 20 runs? 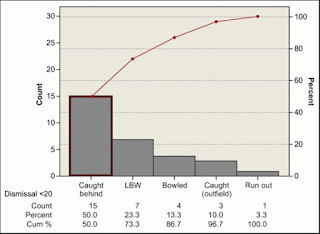 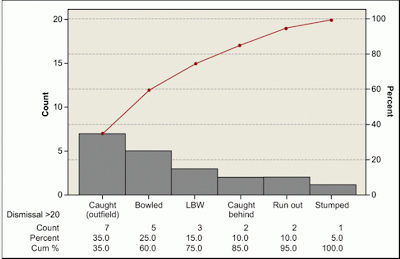 Figure 3: Types of Dismissals for Innings with Fewer Than 20 Runs

Figure 4: Types of Dismissals for Innings with More Than 20 Runs


Being caught behind was the most frequent cause for dismissal when Mike scored fewer than 20 runs: 50 percent compared to 10 percent when he scored more than 20 runs. Why was Mike getting caught by the keeper and the slip fielders so often at the start of his innings? Club Acme’s statistician provided the shot data for Mike as shown in Figure 5.


Of Mike’s caught behind dismissals at the start of his innings, 67 percent occurred while he was playing attacking strokes. In particular, the attacking shots (a subset of attack strokes) that contributed most often to the caught behind dismissals were three types of high-risk shots: hooks, pulls and upper cuts. A Closer Look at the Shots The team analyzed the success of these shots played by Mike at the start of his innings and later in the games. By looking at Mike’s historical strike rate, it was clear that he used to play 25 balls to score 20 runs. The team tested the success of his hook, pull and upper cut shots during the first 25 balls played by Mike in comparison to shots played after 25 balls. The strike rate for balls 26 and higher was almost double compared to the first 25 balls. compared to 10 dismissals out of 28 attempts in the first 25 balls, Mike was dismissed just 4 times in 117 attempts after playing 25 balls.

The conclusion from this analysis was that Mike had to avoid playing those higher-risk shots in the initial stages of his innings.

Other Inputs for Batting

In a brainstorming session, the project team identified the various factors related to runs being scored and created the cause-and-effect diagram shown in Figure 6. Items highlighted in red are the ones deemed to be most critical and that were investigated further.


The project team did not find any difference in Mike’s performance when batting first or when chasing a target. His performance on flat pitches, however, was better compared to green pitches. What was affecting Mike’s batting while playing on green pitches? The batting coach suggested the team look at the type of bat Mike used and his batting position. While the type of bat used (light or heavy) did not have any measurable impact, Mike performed better on green pitches when he was not required to open the batting (bat first) and face the new ball bowlers. On green pitches, his batting average in fourth position was 52.6 compared to 12.1 when Mike opened the batting, a statistically
significant difference (Figure 7). 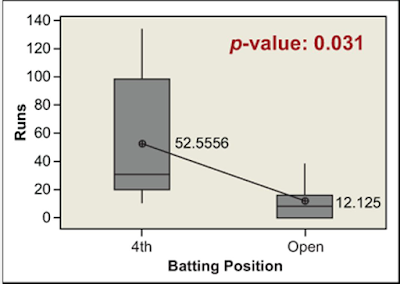 Figure 7: Pitch Versus Batting Position
The project team collected data for Mike’s batting and shot selection against different types of bowlers. Shots played by Mike that did result, or could have resulted, in a dismissal were identified as false or risky and termed “defective.”
The proportion of defective shots was contrasted against the total number of balls played against each type of bowler. As shown in Table 3 and Figure 8, there were differences among the percent defectives for different bowling types at a 0.05 level of significance (p-value: 0.000). From the analysis, it was concluded that Mike played more false or risky shots while playing left-arm seam bowlers (21.48 percent) in comparison to other bowlers such as right-arm seam
bowlers and spinners. 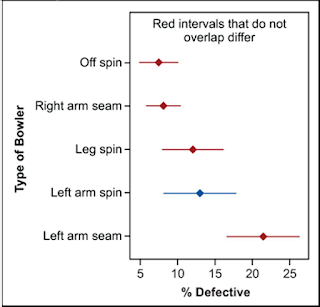 Figure 8: Percent Defective Comparison Chart
The chief batting coach analyzed video footage of Mike batting against left-arm seam bowlers. Mike played a left-arm seam with a closed stance, similar to what he used for right-arm seam bowlers. The orthodox stance blocked him before he played a shot, and he ended up playing around his front pad (protective clothing). He also kept his back swing too straight, playing across the line (moving laterally to the incoming ball) and ended up chest-on to the ball.

Mike was advised to play left-arm seam with an open stance and wider back-lift. With an open stance, he could better align himself up to the incoming ball. For a wider back-lift, he had to pick his bat over the off stump or the first slip area (angle of the bat while playing the ball changes depending upon the starting position of the bat) rather than over the middle stump.

After the analysis was complete, the project team summarized its results and made its improvement
recommendations for Mike and Club Acme. 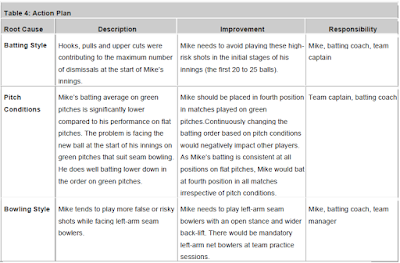 The action plan recommended by the Black Belt and the project team helped improve Mike’s batting consistency. He scored an average of 49.32 runs per inning in the 28 innings of the first six months of 2012 compared to his previous baseline average of 32.52 runs per inning, as shown in Figure 9. In addition, Club Acme improved its win rate to 54 percent (16 out of 28).